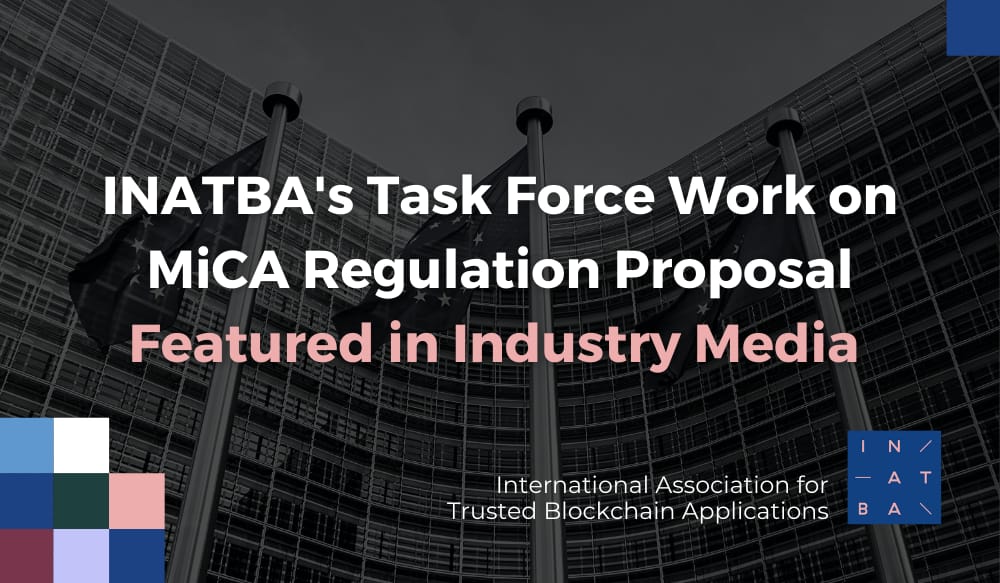 Following its initial response to MiCA six months earlier at the legislation’s announcement, INATBA’s engagement with the proposal has been multi-faceted, including bilateral discussions with MEPs and launch of an internal task force for Member response to the Commission’s Digital Finance Package consultation. This most recent report is the primary output from the INATBA MiCA Task Force, a public initiative formed in November that convened trade associations, civil society organisations and corporate entities in the blockchain space to contribute to an industry-wide response to the proposal.

Authored by five members of INATBA’s Academic Advisory Body, the report aggregates responses from a stakeholder survey and engagement sessions with insights from over 50 organisations, associations and individuals in the blockchain ecosystem.  The report covers three main areas: regulatory awareness, MiCA provisions and the impact of MiCA.

As expressed by INATBA Executive Director, Marc Taverner in earlier reports, MiCA offers regulatory clarity for the European continent and its current and future investors. Similarly, the report respondents believe MiCA will:

“(i) significantly increase the competitive advantage of DLT businesses that are subject to it, (ii) mitigate the fraud and market abuse particularly on the trading platforms, and (iii) enable seamless cross-border operation of businesses that it regulates, (iv) while ensuring that the crypto industry does not threaten the financial stability of the existing financial system.”

The report also highlighted a number of areas for concern in the proposal. As mentioned in media coverage on the report, the authors found an apparent discrepancy between perceived awareness about the regulation compared to actual understanding. With 90% of respondents expressing “sufficient knowledge” of what the regulation would entail, the significant number of respondents who later requested more information about the regulation suggested a lack of understanding. The report also highlighted industry concerns about the proposal’s potential clashes with the nature of decentralised finance, or DeFi. This theme was also discussed during the INATBA Finance Working Group’s recent roundtable series entitled “DeFi vs. Regulation: The Future of Finance.”

Given the rapid evolution of technologies in the crypto-asset sphere, the report closes with a call upon regulators to work closely with the industry to achieve regulation that is both relevant and effective. In its role as the global convener of the blockchain ecosystem, INATBA is committed to facilitating this close working relationship and using its platform to leverage the voice of the industry. We encourage blockchain stakeholders to join this conversation by becoming a Member of INATBA.

Find the articles below: