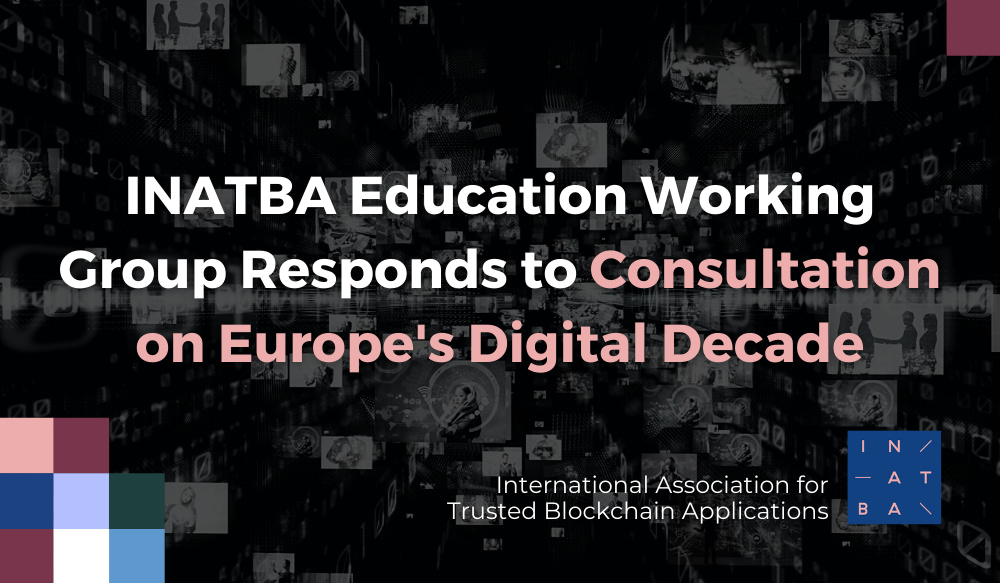 Following President von der Leyen’s proposal for a common digital plan towards 2030, this Communication sets out a vision of what a successful digital transformation will mean for Europeans by 2030.

Below is the Working Group’s response to this consultation:

The Education Working Group of INATBA (International Association of Trusted Blockchain Applications) is committed to identify and provide recommendations on the definition and standardization of blockchain education, both on an academic and professional level.

We hereby support the Commission initiative on Europe’s digital decade: 2030 digital targets and wish to advise on the way the EU should build capacities through digital education and skills.

The Working Group acknowledges a lack of digital education on all layers of European society. Therefore, we attach the INATBA Education Working Group paper Blockchain Education: A Prerequisite for Socio-Economic and Technological Advancement, which aims at describing the current state of industry digitalisation, identifying the target groups that are most urgently in need of Blockchain education and proposing components of a Blockchain curriculum. The paper also integrates a chapter addressing educational targets and a proposal for a Blockchain curriculum.

Moreover, the Working Group would like to highlight a number of areas to be addressed by the “4 dimensions” listed in the Roadmap as objectives of the common digital targets.

First, prior to delivering digital education, we point out the need for standardisation of terms within the digital community with the aim to reach an agreement on their respective definitions.

Second, when delivering digital education, we suggest adopting an interdisciplinary approach, which also takes into account the model of t-shaped person (as understood by McKinsey who also coined the term like David Guest and Tim Brown in the early 2000): We suggest looking for students that are able to discuss matters across the whole process, flexible for change if required and able to learn quickly and adopt new things.

Third, we would like to point out the importance of choosing the right way to deliver content. In the context of a pandemic situation, educational content has to be adapted to the way we are delivering education, which is based on the use of new digital technologies and platforms. In addition to this, we see public and private collaborations as essential to scale up how we deliver educational content.

The creative economic power and the organisational and technological resilience of open decentralised networks is an indispensable ingredient for the socio-economic international positioning of the EU. The public permissionless version of Blockchain is the technological infrastructure that enables or unleashes the full innovative potential of frictionless free transactions, collaboration and organisation.

The Digital Roadmap for the EU needs to embrace these basic principles, supporting infrastructure and enabling legislation and regulation in order to allow itself to reach the highest possible capacity of its economic global positioning. The “legacy legislation and regulation” for the organisation of society, economy and business is based on centralised models that don’t support the new decentralised paradigm shift. Hence, a fundamental and urgent necessity in the EU’s digital roadmap consists in creating from scratch the socio-economic organisational legislation that integrates the decentralisation principles as a starting point.