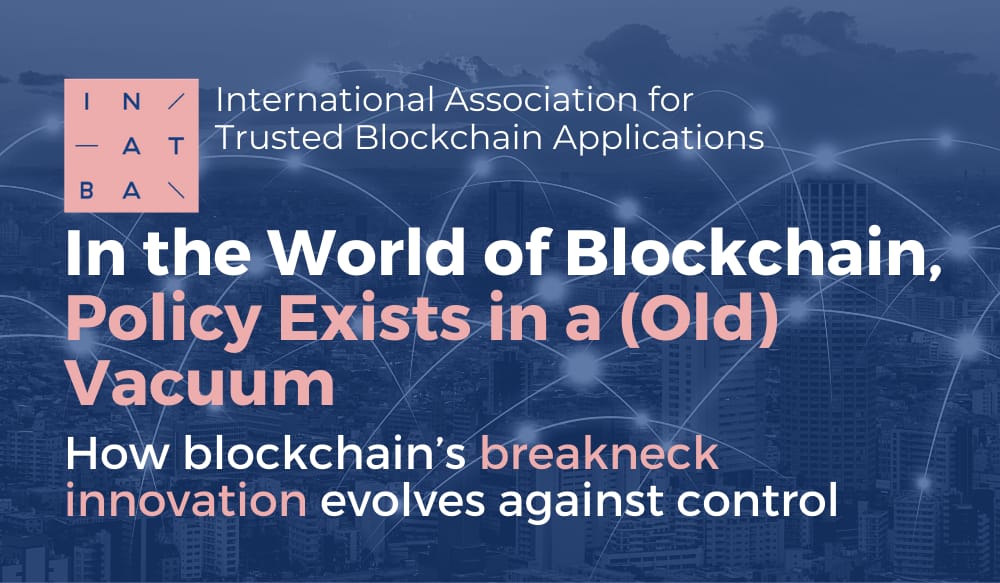 If you attended any blockchain or crypto conference in 2016/2017, you’ll be familiar with this statement, which echoed endlessly across nearly every panel: “Blockchain/bitcoin/ethereum/crypto/ICOs/smart contracts/digital identity need the same regulatory approach the government had to the internet – so true innovation can happen.”

5 years later, we’ve yet to see this support materialize worldwide. As our ecosystem evolved at a breathtaking speed, it was met with policy after policy, most of which were opposite of the “internet” approach. Instead of fueling innovation within their economies, these jurisdictions (whether by intentional choice or hapless design) end up pushing companies, entrepreneurs, developers and business to other regions who were ready for these new advancements.

We saw several timely examples of this disconnect in Europe this year, between MiCA (a far-reaching proposal for regulation of blockchain technologies and digital currencies part of the new digital finance package), the Digital Services Act which includes the use of smart contracts, and a new electronic identification and trust services regulatory framework that encompasses digital identity called eIDAS.

With MiCA especially, our organisation wanted to see how this regulation was driving behavioral and organisational change in the blockchain ecosystem. Our working groups designed and opened a study to companies and organisations around the world (not restricted to our membership rolls) about the expected impact of MiCA (which you can read here).

Surprisingly, 62% of the participants claimed to have a very good or expert level of understanding of MiCA.  Simultaneously, a majority of them (67%) said they had not hired any regulatory expert (law firm, policy consultant, etc.,) to dig into the paperwork itself to see how it would affect their businesses.

It is easy to dismiss this as typical “startup” cowboy antics –  there is, after all,  a strong tradition dating back to the early days of bitcoin for these companies to ignore laws/regulations that don’t seem fair or modern enough to apply to their operations. No need to hire an expert to help follow the rules if you don’t plan to follow the rules.

This is, however, an intellectually lazy choice. The actual reasoning is more shrewd and draws from the perennial problem of large-scale tech regulations like MiCA – namely, the lack of additional explanations, interpretations, or guidelines on how they shall be applied in practice from its authors.

It is almost impossible to prepare if you are not given enough information. In addition, these regulations are also behind the curve nearly immediately after being published. This was especially evident in the MiCA regulation with its glaring omission of DeFi, and now the increasingly popular and profitable NFT (non-fungible token) market.

DeFi (short for decentralized finance) is not just a small “pet project” of the digital currency and blockchain world.

DeFi (short for decentralized finance) is not just a small “pet project” of the digital currency and blockchain world. Its market cap at the time of writing is $77.78 billion USD, more than the annual GDP of Luxembourg — and it’s just barely a year old. The applications are striking in their security and efficiency. Simultaneously, we see the rise of NFTs (short for nonfungible tokens), which are tokens that represent digital or physical assets like art, digital collectibles and even tweets. Adoptees include the U.S. NBA and Mark Cuban, and some are  selling for as much as $69 million. These, too, are unmentioned in the new regulations.

These groundbreaking applications of blockchain and crypto are everywhere. So it feels unlikely governments don’t know about it – our elected representatives and their staff are equipped with plenty of resources to have included it in their work. Rather, it seems that regulations hit a “point of no return” where new inclusions are moot because a draft has already been finalized – after all, MiCA was begun more than a year ago when DeFi was scarcely known outside of deep tech circles. At this point,  government agencies, representatives, researchers, policy writers have now spent time, and an unknown amount of money, writing a continental policy that ignores the inclusion of $85 billion dollars of regulation-ready business. Companies review it, say they understand said regulation, but yet see no need to hire any experts to help them prepare for it.

What this tells me is the industry understands what the policy writers do not. From years of watching agencies try to catch up to the innovations of bitcoin, ethereum and distributed ledger technologies, these companies know that any application of MiCA, or other similar regulations, will vary widely in its consistency and be delayed in its actual implementation. And because it is almost immediately out of date – why stress?

Companies will continue to innovate beyond regulation, and when governments attempt to play catch up with their outdated rulebook, what results is more and more onerous regulations, lost business and tax revenues, and generations of tech advancements lost to more favorable jurisdictions

This is a dangerous game for more than just MiCA, but for all new regulations relating to cutting-edge digital identity, smart contracts, and blockchain. Innovation and regulation are two trains, on two entirely different tracks, going to vastly different places. Companies will continue to innovate beyond regulation, and when governments attempt to play catch up with their outdated rulebook, what results is more and more onerous regulations, lost business and tax revenues, and generations of tech advancements lost to more favorable jurisdictions. Countries who do this will lose out on knowledge, jobs, and money.

We need a smarter and faster regulatory playbook – and a lot more cross-sector assistance. Speaking from our membership only, I know of dozens of universities, companies, and experts who would drop everything to brief the EU Commission, or any government agency, on new innovations.  With the advent of Zoom, guidance can come from anywhere in the world. Regulations can have addendums in draft nearly immediately with plenty of input from research centres, universities, policy think tanks and other experts. For example, through INATBA, several experts and companies were able to respond to MiCA, the Digital Services Act, and eIDAS, sharing their decades of experience to help create smarter and more effective regulations. This is the model we want to keep pushing forward not just in Europe, but worldwide.

DeFi is here to stay. Digital currencies and smart contracts are here to stay. Blockchain and DLT are here to stay. And yes, regulation is here to stay. For that reason, let’s not waste any more time and get better at asking each other for help. And specifically to policy writers, researchers, assistants — give our Working Groups on Finance, Governance, Standardizations (and many more) a call anytime. We would be happy to help.